In the country - Wamboin NSW

We have finally moved out of Canberra. We've been about 2 weeks here and finally unpacked and fairly settled in. It was a bit of a rush in the end, as we wanted to get out of town before any lock down's occurred. We are so much happier out here and don't know how things would be if we'd stayed in Canberra. This house is large and has plenty of space for all of us.

My main focus after moving, was to get a veggie garden started. What I didn't realise was how hard it would be to get veg seedlings. I really wanted seedlings as the weather will cool down very quickly and we may not have time to get seeds up. I did eventually track some seedlings down - akin to finding things on the black market. Chickens still allude us! They are impossible to get. Who would've thought that it would take a pandemic to get people to start thinking about food security. Climate change needs to organise a new marketing campaign.

The seedlings are now planted and we've had a little rain, so hopefully they'll explode with growth - although I don't know how, it's so bloody cold already! We have a large orchard and garden area that has been neglected for a few years, so we just had to dig out some grass and plant and mulch. I even bought some cow manure! Never thought I'd have to buy that! 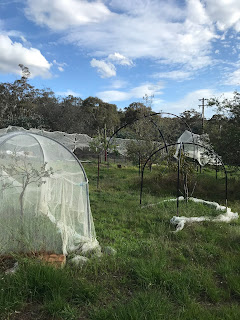 Not sure what all the trees are, but I'm sure we'll find out in time. 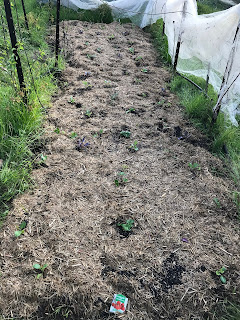 Lots of brassicas, some leeks, turnips and strawberries. 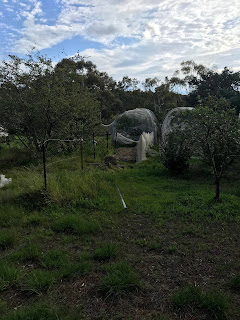 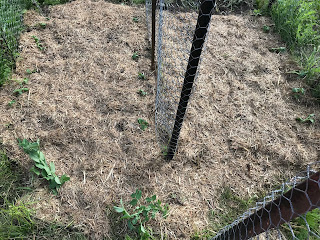 I had made some wicking beds and planted up one with herbs and the other with silver beet and celery.  they are doing much better now that they can get more sunlight. Sunlight was a bit limited in the house in town. Luckily there were a few pots of herbs here and a lovely big rosemary plant so we've got a good supply of most herbs. 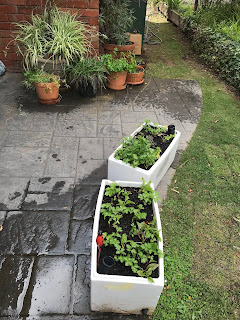 
We've also inherited a pumpkin which has a few on it so that should keep us in pumpkins for a while. Trouble is I don't know how long I'll have before the vine is finished (from frost and cold) and there's still quite small ones on. The pumpkin vine area also had quite a few tomato bushes so each day Astrid and I go out to pick "marties" She doesn't like them but does like to pick and carry them home. 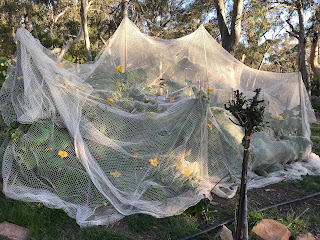 There is a pumpkin vine under there somewhere. I think the netting is to protect it from the rabbits or maybe the kangaroos. 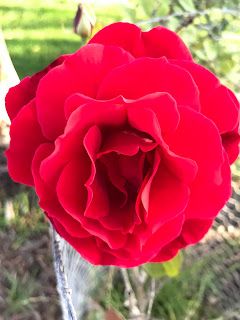 It's autumn in Canberra and we're just starting to see the leaves changing. It's getting cooler, with this weekend being very windy and cold. We have 3 fire places in the house, so they've been getting lit most days. We may even get snow in winter......
Posted by Lucy House at 7:28 PM