Last year I did an online program called Mindful in May. It was really good and well worth doing if you are new to mindfulness or would like more knowledge the subject.

One thing it taught me was the difference between meditation and mindfulness and that mindfulness is actually a form of meditation. It's about doing things (anything) mindfully. You can be mindful anywhere and anytime. You can be mindful while walking, having a cuppa, sitting in the garden, gardening etc. So in the past I used to think that milking for me was sometimes a meditative practice but it's not really true meditation because you do have to be aware of whats happening around you and you actually have to be physically doing something - milking the cow. I now call it mindful milking.

Now, you can't mindfully milk just any old cow. You don't want a fidgety cow, a cow that swishes her tail in your face, a cow that puts her foot in your bucket or one that tries to kick the bucket. You don't want one that poos or pees in the milking bale, you just want a nice quiet calm cow that you can lean your head against and just get into a nice smooth rhythm of milking......ahh so peaceful and relaxing and especially calming! 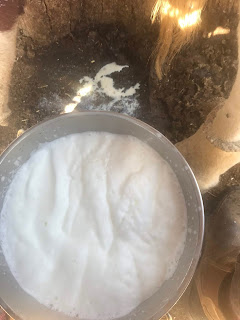 My view while mindfully milking.

I am currently milking two cows. Romano is an AIS X (Australian Illawarra Shorthorn) and is lovely and quiet, milks well (+10L per day), lets her milk down easily, stands quietly while being milked and is generally happy for me to mindfully milk. She is probably my favourite cow of all time. Although in saying that I have had many cows over the years that I remember very fondly. 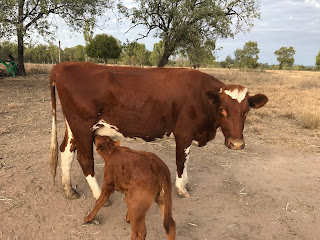 Romano and her heifer calf

Then we have Fontina, a Jersey X. She is not my favourite cow and is quite a way down the list, and in fact almost the opposite to Romano. She's cranky, bossy and has been known to fidget, swish her tail and pee while being milked. And she doesn't always let her milk down, so I often have to let the calf have a suck for a bit to her to let it down. I then remove the calf and can get more milk. She can be so bossy and forthright that even my cowgirl daughter admitted to being a little scared of her!

Well, I have a funny little story from this mornings milking. I was mindfully milking Romano, and it was going very well as I was completely off with the fairies, until I was startled back to the real world by the pressure of a horn in the back of my neck. I let out a little yelp and Fontina got a bigger fright and backed off. Unbeknown to me, she had been standing right behind me and I think she may have been in a mindful state too, and you know how you totter a bit when you're in that state, well I think she must have tottered a little too and just given me a little nudge. She must have been there for a little while because I noticed afterwards that the back of my shirt was quite wet from her dribble. 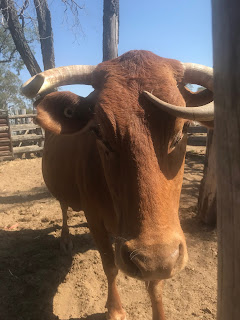 Fontina after we were both startled out of mindfulness!

Actually as I write this, I can remember that her mother (lovely old thing that she was) used to stand up close behind me while I milked the other cows.
Posted by Lucy House at 12:13 PM