We had a lovely day yesterday - my brother in law took us fishing. It was bit tough getting up for a 6am start, but well worth it. We headed off from Roslyn Bay, out past the Keppels and pulled up near Man & Wife (twin Islands). We started fishing and immediately caught some! 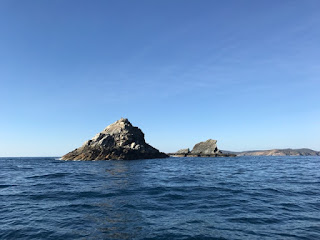 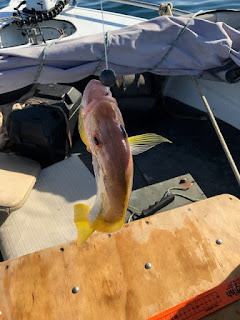 This is my first one - a Hussar

Then  I got seasick!!! I was so excited to be going out on the ocean and then so disappointed that I all I wanted to do was die -well maybe just be violently ill! Then the whales came! There were 2 or maybe 3 groups playing. They were amazing. 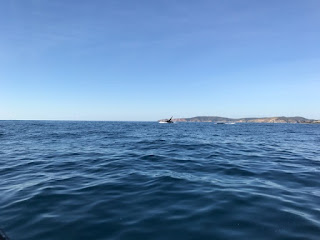 At one stage, one of them started coming straight for us. We started to get a little scared, I could just see us being tipped into the ocean.... 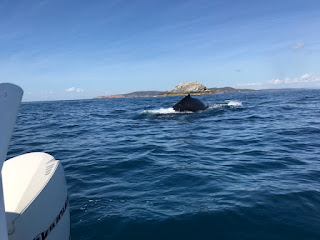 It did come closer, but by that stage I was just fascinated and not interested in taking photos....okay I was trying to work out what to do if it tipped the boat over, but no it was just showing off to us! I really do think they were putting on a show for us. There was a Conversation Hour (Qld, with Richard Fidler) a while ago about the whales at Hervey Bay and the Scientists doing the research had the names of whales that kept coming back each year and they had personalties, so I do think they knew that we were watching and enjoying them and so they were showing off. Animals do have conscious thought! I've been around pigs, dogs, cats, cows and even chooks long enough to know that!

Anyway, I eventually got over my sea sickness - it helped being put onto land for a little while. We stopped on a lovely beach on Great Keppel Island and then on Humpy Island where we ate our lunch. 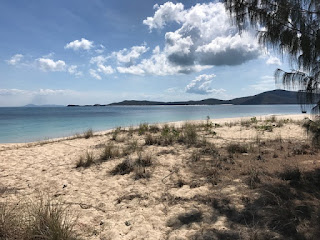 Our view while we ate lunch. Looking out towards Keppel Island.

So after a great success on the fishing front, we headed home to our Beach Shack where we cleaned and filleted and divided the fish. 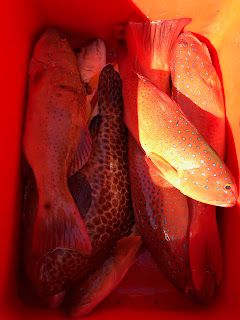 An esky full of fish! 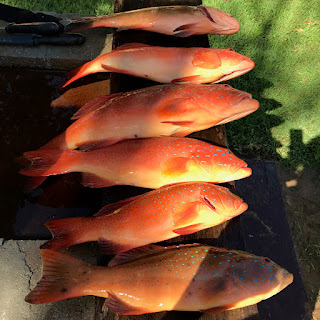 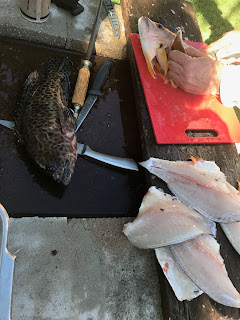 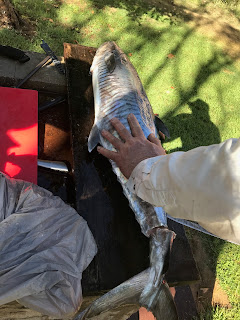 Spanish Mackerel - a fish that is a great fish to catch, as well as one that has a good bone out percentage. I'm keeping some of this as large fillets to preserve in oil (aka tuna in oil). I'll do this next week!

Dinner last night was Baked Coral Trout. No lemon or limes here, so I picked some herbs (parsley, coriander and mint) from our Host's garden, added some chopped garlic and spring onion and then added a splash of soy sauce, fish sauce and sesame oil. 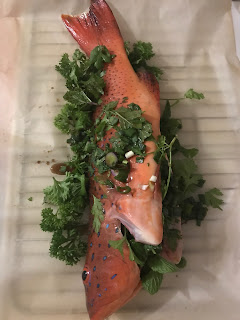 Then wrap in baking paper and baking in the oven. 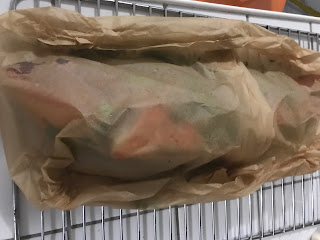 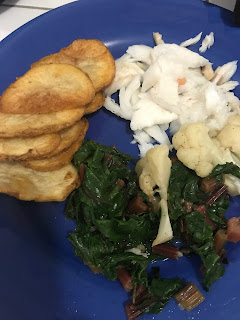 I'm looking forward to getting sick of eating fish!!! Although, I'm going to cryovac most of it and freeze and take home - after preserving some of the mackerel. Follow Lucy's Kitchen if you want to see that.