Edmund went away this weekend fishing. He didn't catch many fish, but did get a few crabs so it was fresh crab for dinner. Served with fresh salad from my market purchases this weekend and some yummy fresh bread. Edmund made the salad, but I made the dressing - Norma's (Kim's mother) famous French Dressing (lots of garlic, french mustard and lemon juice - delicious with fresh seafood!!!) Didn't think to take a picture until now, so I've only got this one! 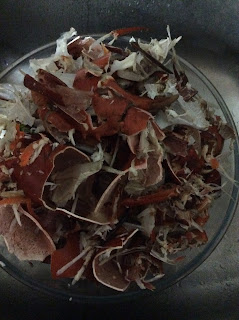 We are lucky to have some lovely fresh produce on our doorstep - okay, crabs are a good two hours drive away.....but we are certainly lucky to get them more often than a lot of people do!

Desert was some coconut/pineapple icecream I made the other day and told everyone that it was to be left until I got back after the weekend! We had a pineapple that got frozen and was soft and squishy, so I cooked it and then (after it cooled) mixed it into some coconut milk icecream. I make a raw egg icecream, which is usually, 600ml cream, 2 eggs, vanilla ess, 1/2 cup sugar, mixed and then put into the ice cream churner. This one was a can of coconut milk, 200ml cream etc and after churning, I threw it all into thermie (or a food processor would work) to blitz it with the cooked pineapple. It was very good, so I'll have to do it again!

Then, just because I haven't had a big enough day (markets this weekend in Rocky and Yeppoon, so only got home about 3.30 this afternoon), I decided to cook sausages ready for breakfast tomorrow. My main reason for this is because I want to have a sleep in tomorrow morning. (at least until 7!!!) 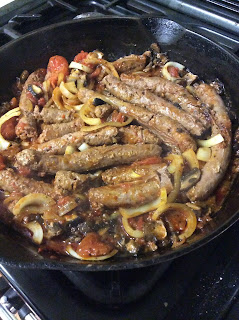 By the way, I'm going to try and post every day.....we'll see how I go. If the internet is as slow as it is tonight, I'll probably end up smashing my computer!!!